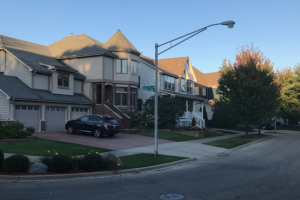 Sauganash Woods enjoys a convenient location which the members of our Homeowners Association in Chicago, Illinois fully benefit from. The Loop is 20 to 25 minutes away while O’Hare International Airport is a 20 minute drive. If you drive the Edens Exressway North for 15 minutes, you will arrive at the Old Orchard Shopping Center.

The desirability of Sauganash was discovered long ago by those on the A List. Known as the “community with clout,” it has been the choice of a number of prominent political figures and judges. Jane Byrne lived there before she was elected mayor. Three of former Mayor Richard J. Daley’s children have lived in Sauganash, including William, who was Bill Clinton’s Secretary of Commerce.